Posted by Bird Conservation Research, Inc. at 7:54 PM No comments: 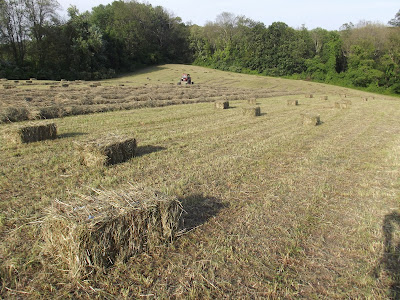 Three tanks of  gas is my self-imposed limit- that point at which my shoulders and mind are tired enough to make continuing on less safe for something as strenuous as chain-sawing.  On this day, however, the third tank and four more hours of labor had gotten me to where I needed to be- at the completion of beating back decades of landscape neglect.  A profusion of multiflora rose, autumn olive, privet, burning bush, Japanese barberry, bittersweet, amelopsis and other non-native invasives had overrun the borders of the ten-acre Connecticut farm now operated by Bird Conservation Research, Inc. as a field station.

To be sure, such border creep into agricultural land is largely the consequence of seed planting by native birds that disperse the fruits and seeds of exotic plants.  However, such creep is not compatible with the goals of production agriculture, and our mission for the past four years has been to maximize wildlife values of landscapes within the constraints of an effectively run agricultural operation.  Such borders, although wildlife-planted, are far from having the optimal vegetation composition for these locations.

Now that these borders are cut back (although the gargantuan task of turning the resulting slash into wildlife brush piles remains ahead), we are examining available options for replanting the borders with superior vegetation.  The borders will shrink from their present 30-75 foot-wide swaths to a more modest but agriculturally practical 15 foot edge that is punctuated by mature trees.  The understory is to be converted from invasive exotics to high wildlife value natives, like our various species of evergreens, hollies, viburnums, dogwoods, shadbushes, cherries, roses and aronias, as well as to non-invasive cultivated plants that are also favored by wildlife.

It is important to recognize that wildlife values are not confined to those species that breed on the property, but also include those conferred by species that pass through the area- notably migratory birds.  Hence, plantings must have value at all seasons.  Species that flower early and late, species that have persistent overwintering fruit and species that offer substantial cover, roost sites and nest sites are the types of plants to be selected.

At present, the field station is home to species that successfully use agricultural landscapes like the American Woodcock (we are presently working on banding our local population).  It also serves as a migratory stopover (and possibly incipient nesting population) to such typically Midwestern species as the Vesper Sparrow (territorial males in early spring), Savannah Sparrow and Clay-colored Sparrow (present spring and fall).

Posted by Bird Conservation Research, Inc. at 6:29 PM No comments: