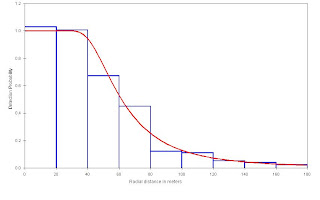 This figure shows the detection probability of Black-throated Blue Warblers encountered at increasing distances from an observer.  It was generated using program DISTANCE.

Population estimation as traditionally taught in AP Environmental Science is simplistic and does not take into account species detectability or population changes due to immigration, emigration, mortality and natality.  Lab activities also make little use of free software available for estimating populations.  The software DISTANCE and MARK are are used for estimating populations, respectively, from large scale surveys and from mark-recapture projects.


To introduce teachers and students to more sophisticated methods of population estimation that go beyond the simple but unrealistic Lincoln-Peterson method, we have developed two laboratory investigations that use the 1) Jolly-Seber method, that computes populations by taking into account population changes that occur over time, and 2) Distance sampling (using the variable circular plot technique), that computes populations by accounting for differences in species detectability encountered during field surveys.  Both investigations may be found under the Educators tab of the Bird Conservation Research, Inc. web site.
Posted by Bird Conservation Research, Inc. at 7:27 AM