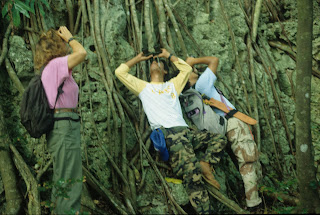 In the VCP technique, observers measure the horizontal distance from a survey point to the location of individual animals.

Forest bird surveys conducted by Bird Conservation Research, Inc. use the variable circular plot technique (VCP)- a very sophisticated and powerful tool used in field surveys of animal populations. It is the method employed by most technically advanced wildlife studies, and is the field method underlying the BCR bird population estimates (see previous BLOG) made in Connecticut and Rhode Island.  During the eight years of this study, high school science students were involved in computerizing and analyzing the enormous volumes of data gathered (50,172 bird observations and 19,980 habitat measurements!).


To educate students into the utility of VCP, we have developed a lab investigation for AP Environmental Science that leads them through the steps of gathering field data.  This investigation moves from collection of field data to computing population densities using DISTANCE software.  Data gathered from VCP are entered into DISTANCE and turned into densities of species per square km.
Posted by Bird Conservation Research, Inc. at 7:05 AM