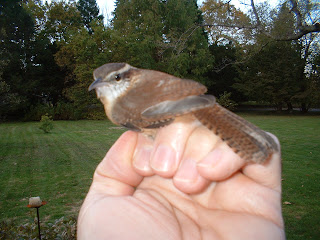 A number of bird species are thought of as being permanent residents in southern New England.  However, although the species are present year-round, the same individuals are not necessarily present.  In fact, populations of resident species often change considerably between seasons.  In a number of instances, short distance migrations occur among some individuals.  In eastern Connecticut, ongoing research conducted by Bird Conservation Research, Inc. has demonstrated that species like the Tufted Titmouse, Blue Jay and Northern Cardinal show population declines from summer to winter as birds appear to leave the region.  In contrast, the Black-capped Chickadee shows population increases that appear to be driven by movement of chickadees into the region from further north.  A number of wintering species also concentrate their numbers near the coast, where winter temperatures average milder than in northern areas.  These findings are detailed in the paper, Seasonal Shifts in Population Distributions and Habitat Use by Permanent Resident Forest Birds in Eastern Connecticut.
Posted by Bird Conservation Research, Inc. at 6:41 AM No comments: 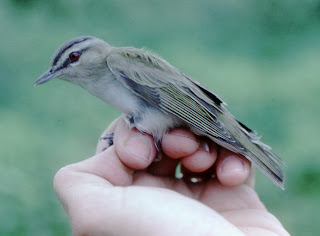 Some years ago, I sent off to the venerable Connecticut Warbler an article entitled Saving the Red-eyed Vireo.  After receiving no review or reply of any kind, we at BCR decided to publish the paper in our own Contributions series (http://www.birdconservationresearch.org/pdf/pub_15_saving_red_eyed.pdf), where it has since received enormous worldwide readership.  The paper is a popularized version of a scholarly work, entitled Endangered Species, Provincialism and a Continental Approach to Bird Conservation (http://www.birdconservationresearch.org/pdf/pub_7_endangered_2.pdf), which appeared in the journal Avian Conservation and Ecology.  Even now, six years after its initial appearance, this paper remains among the journal's most frequently downloaded.

These articles asked the question, what should our conservation priorities be at the regional level in light of continental concerns and local practicalities?  I argued that we in the Northeast live in one of the most well preserved examples of the temperate forest biome (one of limited distribution to begin with) left on the planet, and this is where we must focus our limited conservation resources.  It is the seat of our greatest regional biodiversity and the one for which we can exert our greatest worldwide conservation impact.  I further demonstrated by examining state endangered species programs that, instead of using this kind of approach, states were often disappating efforts into programs where little consequential conservation gain was likely to be achieved.

The rub with this kind of viewpoint was that it identified investing conservation efforts into species like northeastern grassland birds as non-viable enterprises, especially in light of these species being ones with enormous continental distributions and having population increases over large parts of their range.  This view sent conservation colleagues into veritable interplanetary orbit from which many have still not come down (although, interestingly, other papers making similar arguments have since appeared, and the wording of local conservation documents has subtly shifted to acknowledge that the previous paradigm of attempting to save everything was as full of holes as swiss cheese).  In short, although the penalty for initially doing so was great, at some point someone needed to point our that the emperor really didn't have any clothes.  Otherwise, the emperor was going to have a long, cold winter.

At the regional level we do tend to become myopic toward larger issues because we see only what is around us.  I myself have been as guilty of this as any of my colleagues.  Indeed, back in the 1970s I was one of the architects of the "lets save everything approach" in Connecticut which has since, unfortunately, evolved into an entrenched, inertia-ridden bureaucracy of naive thinking.  It took an extended tour of duty in the remote tropical Pacific, where there were real endangered species to deal with and real ecological triage decisions to make, for me to see the world through new, more realistic eyes.

So, back to our friend the Red-eyed Vireo: it is presently a species with immense regional populations because its core habitat is extensive and improving in character.  It is also one with a distinct Achilles' heel- it lives in a globally endangered biome and really prefers only a portion of this biome- interiors of mature, oak-dominated forests.  It may be thought of as a keystone species whose well being reflects the larger well being of the ecosystem as a whole.

In southern New England, we are presently blessed with a landscape that is 2/3 forested, and the forests are assuming an old growth character not seen here since Pilgrim times.  This convergence of characteristics has made our forest bird community immensely viable, as is evidenced by the local success of the Red-eyed Vireo.  How long this confluence of abundance and quality can persist is another matter, however.  Our region has now passed the point at which forest is expanding in distribution.  In fact, it is now in decline and the remaining cover is becoming increasingly fragmented as urbanization proceeds.  This means that if we are to preserve sufficiently extensive examples of unbroken forest to ensure the long term viability of its forest bird communities, the time to act is now.

But, in case you haven't noticed, land in southern New England is very expensive.  The amount of capital required to purchase substantial acerages is enormous.  Several years back, I did battle with the forces of darkness (i.e. big developers) in Old Saybrook, CT, arguing that a tract of 1000 acres of coastal forest was disproportionately valuable to New England bird communities because of the high density of winter residents it supported.  Although my arguments contributed to slowing the tract's development, to my knowledge the vast sum of money required to wrestle the land from the hands of developers has yet to be raised.

The question then becomes what are we doing squandering our limited time and resources blowing out a few candles in the kitchen when the whole house is starting to burn down?  If we are to preserve our premier ecosystem in southern New England, we must keep our eyes clearly focused on our goal.

R.J. Craig
Posted by Bird Conservation Research, Inc. at 9:13 AM No comments:

WHAT'S HAPPENING WITH THE YELLOW-BELLIED SAPSUCKER?

One of the very few advantages of aging is that as we do, we gain a larger perspective on events in the natural world.  When I first began performing systematic surveys of Connecticut birds nearly 40 years ago, the Yellow-bellied Sapsucker was a decidedly uncommon and local species of the highest elevations of northwestern Connecticut.  I found it in places like open swamps at the summit of Canaan Mt.  Observers from a century previous reported its occurrence in much the same manner.  It was primaily a boreal species that straggled south to enter the coolest locations of southern New England.

Then, something happened- something that made this northern bird expand dramatically at its southern range limit in opposition to the larger (and likely global warming-related) trend of southern species expanding north.

From its few residences in Connecticut in the early 1970s, it began expanding through the northwest hills.  During the initial year of the Forest Bird Survey of Southern New England (2001), it also appeared in the northeast CT town of Stafford.  Much as it had been in northwestern CT, it was associated with open swamps.  Initial population estimates there were 126.  Upon resurvey of the region in 2004, the number grew to an estimated 502.  However, even this number paled in comparison to the 21,587 estimated for northwestern CT in 2007.  Indeed, the sapsucker had become the commonest woodpecker of that region.  Surveys of southwestern CT also showed a substantial population of 891.  Furthermore, the species had expanded habitat use to virtually every kind of mature forest present.

So, what happened?  What could have released this boreal species to expand into mature upland forests and inhabit them at high densities?

Within their principal range, sapusckers are characteristically birds of earlier successional, open deciduous forests, often those near water and with dead trees.  This characterization matches well with the swamp habitats in which birds first appeared in both northeastern and northwestern CT, and it suggests that this type of environment represents core habitat.  But what of this new, huge population now inhabiting mature upland forest?  How did that fit?

One can erect a number of alternate hypotheses to investigate- ones that would make interesting thesis projects for enterprising students.  One strong possibility is that southern New England forests have become increasingly interspersed with open swamps due to growth in beaver populations over the period of sapsucker expansion.  The landscape as a whole may, therefore, now be much more attractive to the species even though much of the forest has mature trees not generally favored by sapsuckers.

Another possibility is evolution at the range limit.  Although range limit populations tend to have reduced genetic variability, some key genetic change might have occurred that permitted our local population to expand into a new habitat.  There are strong genetic arguments that can be made against this being very likely, but still, it's an intriguing thought.

Still a third hypothesis is that population pressure from the heart of the sapsuckers' range is driving peripheral populations into marginal habitats.  This sort of thing has been documented for other bird species.  In this case the possibility can be explored by examining long term population trends recorded by the Breeding Bird Survey.  However, when one does this, population declines appear to have occurred across maritime Canada during the past 40 years, which argues against this hypothesis.  Moreover, the sheer abundance of sapsuckers in northwest (and now northeast) CT forests suggests that the species is doing very nicely there.

So, does anyone else have any speculations about what's going on here?  This is a prime example of the dynamic rather than static nature of natural systems.