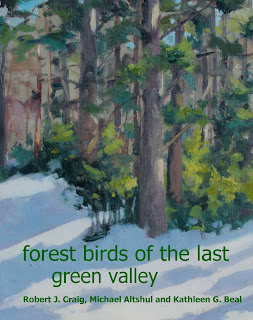 Forest Birds of the Last Green Valley, the preliminary report from the eight year long Forest Bird Survey of Southern New England, is now available for free download.  It is may be obtained from Bird Conservation Contributions, the open access scientific journal of Bird Conservation Research, Inc.  Printed copies are also available through the BCR web site.  The report covers the first two years of the survey and provides initial estimates of populations, distributions and habitat use of birds in eastern Connecticut.

Although the report, first published in 2003, was based on limited data and analyses, it provided for the region the first fully quantitative conservation planning resource for birds.  Environmental planners have historically been able to draw upon detailed data on soils, geology and land cover in making conservation decisions, but they have had virtually nothing to use on wildlife.

This first report is to be superseded by Forest Birds of Connecticut and Rhode Island, an atlas of forest bird resources of the region.  The atlas will cover the full eight years of study and, as such, will make use of greatly increased sample sizes.  Duplication of sampling during the study period also will permit assessment of findings in light of temporal variation in bird populations.

Posted by Bird Conservation Research, Inc. at 2:48 PM No comments:

Final computations of the regional populations of Connecticut and Rhode Island’s forest birds are presently underway.  This is, however, only one aspect of the ongoing analysis of the enormous quantities of data gathered during the Forest Bird Survey of Southern New England.  Upcoming analyses include characterization of the habitats of Rhode Island and western Connecticut as well as analysis of the relationship between habitat and bird populations. When complete, our analyses will result in the publication of Forest Birds of Connecticut and Rhode Island.

Some of the most recently computed population estimates follow:

Posted by Bird Conservation Research, Inc. at 10:13 AM No comments: