AN ENDANGERED ISLAND BIRD ON THE BRINK 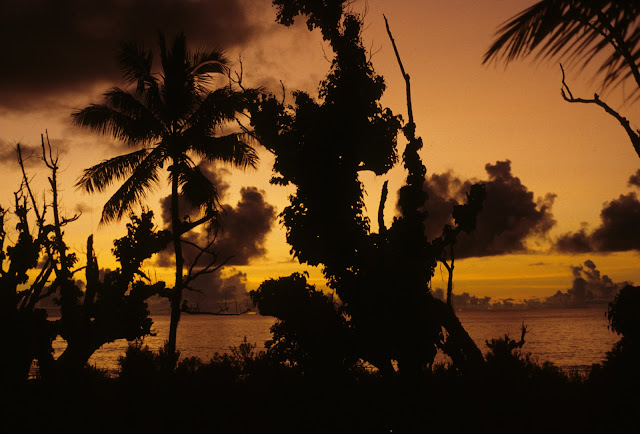 Sunset on the beach at Rota, Mariana Islands.

I've been having tropical thoughts again.  It is something I do- flashbacks brought on by a rose-tinted sunset, by a certain houseplant scent, by some seemingly insignificant detail that transports me back to a separate lifetime.  It was a long time ago now, the better part of twenty years, and yet it doesn't seem that way.  My father warned me that memory was like that.  He would speak of exploring the Panama jungle seventy years hence and say it all seemed like yesterday.

My tropics were those of the Pacific and its remotely seductive islands that drove even Darwin to distraction.  The natives often described their home islands as paradise and, indeed, there were large elements of those landscapes that were difficult to distinguish from anything other than that hackneyed word.  My wife, son and I still talk of personal flashbacks in a kind of private family speak that we agree we largely can't share with others.  They could never really understand.

The specific instance of my latest digression began when I realized during an extended conversation that I was thirsty.  My thoughts drifted from that present thirst to real thirst- the kind that sets in when even thick jungle shade does nothing to alleviate the saturating humidity of a tradewindless tropical afternoon.  A day in the field there always involved carrying at least a half gallon of water and even then, when field time ran to 14 hours, supplimentation of milk from machete-sliced coconuts was a staple.  Indeed, to this day I have not shed the machete from my backpack.  One never knows when one might need to seek out a coconut, although, to be sure, I've never again had field clothes so ringing wet with perspiration that even sun-steamed coconut milk appeared as a delicacy not to be missed.

That was the backdrop for what I did- sublime, but awful, and ultimately that awful was a key ingredient in bringing me back to my present reality.  In that world, the constant strain of dealing with multiple species endangerments, true endangerments, ground like an undigestable stone in my stomach.  Among other projects, I was in charge of an effort to save an otherwise unknown little bird, the Rota White-eye, from its catastrophic free-fall toward extinction.  I estimated that it had declined nearly 90% in ten years, and it had contracted its range to small patches of high elevation cloud forest.  It was all so hard to fathom that this was happening on largely undisturbed, dreamily jewel-like Rota in the Marianas Islands chain.  When one looked down on Rota from the air, it seemed inconceivable that anything could be amiss on a vision so beautiful. 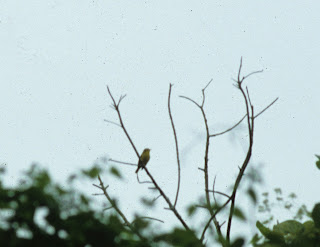 The first photograph of a wild, highly exposed Rota White-eye.

When I began my work on these white-eyes in 1990, how to distinguish males from females was not even known, so my first step was to learn something of them.  I had already studied related (presumably the same) white-eyes on nearby islands (http://www.birdconservationresearch.org/pdf/pub_5_microhabitat.pdf), so I had some idea of where to begin.  As soon as I started observing, however, I realized that this bird was something different; it didn't look the same, it didn't sound the same.  The differences were so profound that, like several before me, I expected it was an undescribed species, a suspicion that ultimately proved to be true.

I initially focused on studies of social behavior and feeding (http://elibrary.unm.edu/sora/Wilson/v106n01/p0165-p0169.pdf), and these provided clues about causes for the decline (http://www.birdconservationresearch.org/pdf/pub_1_conserv_wh_eye.pdf) that meshed well with suspicions raised as early as the 1980s.  Fifty years before, white-eyes had been common and widespread, but during the intervening years a predatory bird introduced from southeast Asia, the Black Drongo, had expanded its populations.  As it expanded, white-eyes declined and contracted their range.  The only places where white-eyes remained were the high elevations where drongos were still uncommon- circumstantial evidence for cause and effect, to be sure, but this pattern made sense in terms of what I was observing.  The white-eyes were tiny, highly social, flocking birds that frequently flew in groups above the forest canopy, exposing themselves to drongo predation.  They would be the first and easiest bird target of this new predator.  In the absence of any evidence for a disease connection, drongo distributions seemed the most likely smoking gun related to the decline.

Time was not a luxury with a population showing such rapid decline.  Some action had to be taken or time could very easily run out.  My decision was to implement a program to reduce drongo numbers so that their pressure on the white-eye populations, if any, would decrease, thereby buying some time for developing a permanent conservation solution.  At the same time, I began making the case to appropriate agencies that a captive breeding program needed to be initiated while there were still enough birds left to catch.  There was no guarantee that the rate of decline was linear, and if it were approaching what mathematicians refer to as a vertical asymptote, then the time to extinction was approaching zero.  The asymptote phenomenon had actually just happended on neighboring Guam, where within a matter of months the Guam Flycatcher had gone from saveable to extinct.

After clearing a series of bureaucratic hurdles, including going through military-style firearms training in order to be licensed to carry out this project, I began the control program in 1991 with a small group of islander volunteers, my 12 year-old son, several old shotguns, a single pickup truck (which, notably, had a board as a front seat and a semi-dead battery) and 1350 rounds of ammunition.  This was the way that real conservation happened in the trenches.  Despite the shoestring nature of the project, within a few weekends we had eliminated 1,100 drongos (20% of their total population) principally in the heart of the white-eye's remaining range.  I used our hunting data to estimate that with only 40 field days, we could reduce drongo populations to a point where they would cease to represent a white-eye threat.

I then sent out repeated pleas to the overseeing agencies for more ammunition and the time to complete the project.  We had a strategy, a team in place and the will to move forward.  Instead, a year passed and still no agency action followed.  I did, however, succeed in generating interest in starting a captive breeding program.  By 1993, birds were being caught and a breeding effort begun.  I took the first one out of a mist net with shaking hands.

At that point, my direct involvement with the Rota White-eye mostly came to an end.  I chaired the Pacific Island Recovery Team for a few years afterward and wrote a recovery plan for a different endangered species, but otherwise it was back to New England for me.  My projects in the Pacific passed to the next generation of researchers.  Within several years of my departure, another population survey confirmed my estimate of a 90% population decline.  At about the same time, an effort began to redefine the reason for decline as one of habitat limitation, presumably so that "critical habitat" could be defined.  Observation, however, contradicted assertion.  Ample evidence demonstrated that birds had not in the past and were not presently restricted to one particular forest type.  Instead, direct sightings of drongo predation on white-eyes provided still more evidence that drongos were a likely agent of white-eye decline.  A second albeit abortive effort then began to control drongos in the same locations where I had hunted them years before.  This effort was abandoned when the researchers decided the hunting was too difficult.

During one final trip made to Rota in 1995 as part of a recovery team meeting, I made a vertical ascent up the steepest slopes leading to the island's central plateau in order to discover whether unknown white-eyes were inhabiting  the nearly pristine forests that cloaked the area.  In a day-long climb, I encountered no birds until I reached the plateau's summit.  Here I found a flock that fed at length from a grove of introduced bamboo- an observation that further illustrated the weakness of the habitat limitation argument.  I made one final try at finding birds on my way down, although as the evening light faded I found myself stranded on a ledge from which I could escape only by sliding down a cliff on a fig vine- a nonfun, heart-pounding experience during which the coral rocks tore the rear off  my pants.  As I trudged the last miles back to my hotel room, I was glad it was dark.  That was my last field day on Rota.

That brings us to the present, where even after all these years I feel disappointment about the way the white-eye saga has unfolded.  The species still persists, suggesting that its decline has not accelerated as I feared it might.  However, the rate of decline is unclear from published reports, which have not been updated in over ten years.  Furthermore, captive breeding efforts have since the 1990s produced few positive results and are now largely abandoned.  In fact, aside from a 2006 federal designation of critical habitat, little appears to be happening on the white-eye front.  Complacency, I fear, has settled in.

Several considerations come to mind concerning all this: science is difficult; conservation  is harder.  It is easier to define a problem as too difficult than to do anything about it, which appears to be what's happened in the case of the Rota White-eye.  However, one must carefully pick the causes one wishes to take up; there isn't enough life energy and life isn't long enough to conclude many successfully.  I've now spent ten years on a project that I've decided is the one where I can have a significant impact (read about this here).  It will likely take me through to the end of my career.  I hope for this little bird's sake that someone choses it as their cause.