Analysis of cover types shows that the forests of Rhode Island (RI in the graph below) are dominated by xeric oak and conifer associations.  Northeast Connecticut (NECT) most resembles Rhode Island in its forest composition; both these regions are extensively underlain by glacial sand and gravel.  The locations most heavily dominated by oak forests are Southeast (SECT) and Southwest (SWCT) Connecticut, where lower elevations and milder climates prevail.  Central Connecticut (CECT) also has a high proportion of oak forests, but has as well extensive cover by more mesic-associated mixed deciduous forests.  Much of the remaining forest in heavily urbanized central Connecticut is indeed in wetter environments.  Northwest Connecticut (NWCT), with the most mountainous terrain in southern New England, has less cover by oaks and more cover by conifer-hardwood forests.  Such forests are generally associated with cooler, northern climates. 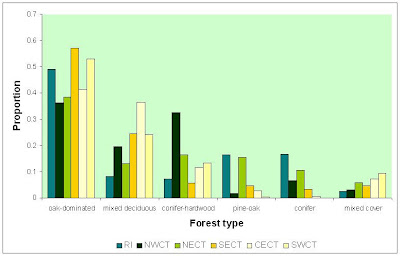 Posted by Bird Conservation Research, Inc. at 12:10 PM No comments: