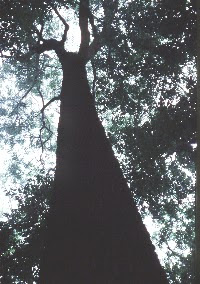 The tree stumps so prominent in my 1976 plot were now gone without a trace.  They were leftovers from the 1938 hurricane, which passed nearly over this low hill bordering Connecticut and Rhode Island.  Until that time, the site had been cloaked in a stand of old growth that had never been logged, although storms like the 1815 hurricane had similarly taken their toll, as evidenced by growth rings on stumps recorded by Harvard botanist Hugh Raup shortly after the 1938 storm.  These were still visible to me 38 years later.  It was the last forest in Connecticut with any claim of being virgin although, to be sure, it was one with a dynamic history of growth, disturbance and regeneration.

I first visited this site in July of 1976, when I was quantitatively analyzing Connecticut’s newly defined critical habitats.  The site had grown up to a dense, even-aged stand of young trees, most of which could trace their beginning to 1938.  During my investigation, the prevailing forest cover was of trees just under 40 years old and with an average diameter at breast height (dbh) of 18 cm.  Except- all the old trees had not been blown down.  There were still a handful of much bigger trees that had clearly started growing long before that time.  There was a monumental sassafras with a 62.3 cm dbh - two feet across- quite something for a tree that typically appears in southern New England forests as a scrawny understory tree. There was also a mammoth white oak with a dbh of 86.6 cm- approaching three feet in diameter- a black oak of 53.3 cm dbh, a red maple of 72.9 cm dbh and a ‘red’ pignut hickory of 72.9 cm dbh.

To characterize this site and to provide a baseline for future investigation, I established a 10 x 20 m plot that was clearly delineated by the presence of a massive boulder at its northeast corner (remember, these were the days before GPS).  I found 11 canopy trees of three species that had a mean diameter of 25.9 cm.  The giant sassafras was the largest of them.  Saplings included the same species found in the canopy: white oak, black oak and sassafras, although it appeared that red maple might grow in importance as a canopy tree. The site was also a very xeric one, with a shrub layer dominated by a dense stand of huckleberry.

This brings us to today- 28 July 2016- when I again visited the site and re-surveyed my old plot, still easily distinguishable from the presence of the boulder and immense sassafras.  Over the intervening 40 years, the forest had changed, with only seven canopy trees now averaging 37.4 cm dbh being present.  One of these was indeed a red maple of 18.1 cm dbh- a 1976 understory tree that had, as predicted, invaded the canopy.  Furthermore, the old sassafras, although still an imposing presence within the plot, was recently dead, with its uppermost branches now carpeting the forest floor.  The shrub layer was still strongly dominated by huckleberry, although the tall blueberry I had identified in the plot turned out to be Vaccinium atrococcum rather than the V. corymbosum I had mistaken it for in 1976- silly me; the latter is a wetland shrub, as I knew, and this was no wetland.  The former is much more of an upland species in southern New England.

In general, the canopy of the site as a whole had greatly thinned and now resembled that of typical mature forests in the region.  Indeed, with a present prevailing canopy age of about 80 years, it should .  As I investigated the vicinity, I found a number of substantial tree specimens.  I measured 22, which had an average dbh of 62.2 cm compared with 49.9 cm dbh for 24 trees in 1976.  The largest was now an 83.9 cm dbh red maple.

I have now lived long enough to witness first hand the process of forest succession- not inferred it from forest stands of different ages, but directly observed it by examining the same plot over a very long series of years.  This raises an issue: this site, with its long and periodically catastrophic history, does indeed represent a virgin stand despite not looking terribly different than a hundred others in the vicinity.  Periodic disruption is part of the natural process that keeps this woodland in a state of more or less dynamic equilibrium.  Fortunately for those of us interested in such things, it is now owned by a land trust, so we can continue to follow its evolution for decades to come.

Posted by Bird Conservation Research, Inc. at 10:04 AM No comments:

THE REMAINS OF A CONNECTICUT GRASSLAND: A FORTY YEAR HISTORY 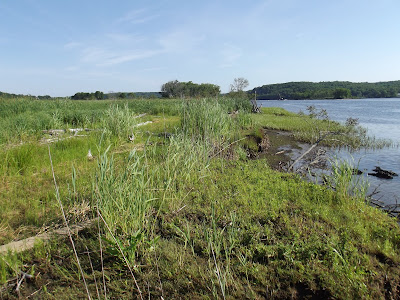 The switchgrass-sedge grassland of Great Meadow is now largely invaded by cattails and reeds.

The birds were actually better this time around.  In June of 1976, pickings at Great Meadows in Essex, Connecticut were a bit slim, with gulls being among the most abundant species present.  Aside from the ubiquitous Common Yellowthroats, Swamp Sparrows, Marsh Wrens and lone Bobwhite, there was not much of interest present.  In contrast, during this June of 2016, gulls were uncommon and Bobwhites had disappeared, but multiple Ospreys were nesting and several Purple Martins flew overhead.  Both were all but absent in earlier years.  Great Egrets, confined to the river mouth in the 1970s, were also now conspicuously present, as were Rough-winged Swallows, which had replaced formerly common Bank Swallows.  To round things out, a Spotted Sandpiper fed along the banks of the adjacent Connecticut River and a Common Tern explored the river and adjacent tidal creeks.

Forty years have now passed since my first investigation of this extensive lowland bordering the lower Connecticut River.  I had initially gone there to study the extended ecotone between the site’s weakly brackish marsh and adjacent upland.  I thought the wet, grassy meadow that developed there was about as close as southern New England could come to having an extensive natural grassland, and I wanted to document its nature so that I might determine its persistence over time.  Toward that end, I inventoried the entire site and also established a study plot to quantify the presence of key community members.  My plot, chosen to be representative of the site as a whole (although I noted that there was a gradient in species composition from the north to south end), demonstrated that the predominant species were switchgrass (Panicum virgatum), a short species of bulrush- Scirpus americanus, and a sedge- Eleocharis palustris.  In all, I found 11 herbaceous species occupying the 100 m2 plot.

In 1983, I re-visited the meadow and observed that the community was much as it had been seven years before.  However, during this 2016 survey, I found that the ecotone had changed dramatically, with cattails and reeds invading much of it.  Furthermore, S.  americanus now appeared to be present primarily along the edge of the Connecticut River.  This observation left me perplexed enough that I began to doubt my initial identification, but upon later examining specimens I had collected both in 1976 and 1983, I found that my initial determination had been correct.  In the place of this species, I found that the sedges S. fluviatilis, S. atrovirens and the forb Peltandra virginica had become widespread.  I had recorded these species on my 1976 surveys, but none had occurred in the study plot, indicating that they were less common than now.  Switchgrass, although still present, was also not nearly as common as it had once been.  Even into 1983, I was still describing the site as a Panicum meadow, but this characterization no longer held.  Moreover, the entire meadow itself had shrunk from about 6 ha in 1976 to about two ha at present.  All these changes suggested that the site had become wetter over time, with the new dominant species t.ypical of emergent marsh rather than upland ecotone.  Human manipulation in the form of expanded mowing further assisted with reducing the meadow’s extent and, indeed, portions of the meadow have in the past been mowed for hay.

So what is to be gleaned from such long-term observations?  Well, first of all, I’ve concluded that my initial characterization of the meadow as a wet, albeit upland grassland was a bit generous.  With the benefit of now having examined all of the major herbaceous wetlands of the lower Connecticut River for decades, I think that it is more reasonable to characterize such meadows as simply vegetation zones within larger marsh ecosystems.  Furthermore, it now is clear that such communities are not static entities, but are rather dynamic associations that change over time in response to changing physical and competitive environment as as well as to human manipulation.

Alas, the notion of naturally persistent grasslands in southern New England is for me one that has become progressively harder to believe in.  We might still hold out some hope for the reed-canary grass (Phalaris arundinacea) ecotones of more completely freshwater marshes further inland, as Phalaris appears to be aggressively competitive with other species.  However, here again, it seems more reasonable to characterize such habitats as simply marsh vegetation zones rather than upland systems.  I suppose dune grass communities of the coast, nominal though they are, hold the only real claim for being naturally persistent southern New England grasslands.
Posted by Bird Conservation Research, Inc. at 6:53 PM 2 comments: